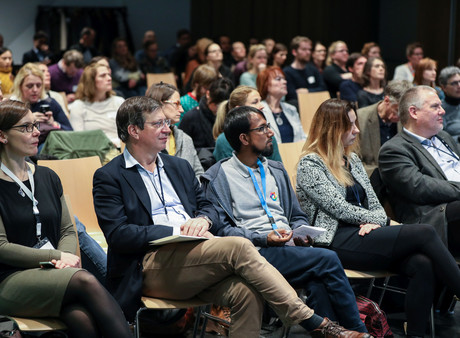 One year of Charité 3R: “We have an obligation to pursue alternatives”

Charité 3R celebrated its official inception roughly a year ago to this day, Tuesday, December 17, 2019. The centre used the occasion to host a symposium titled “One year Charité 3R – results and perspectives” at the CCO auditorium at the Charité Campus Mitte.

About a dozen of instructive and compelling presentations informed the guests of the missions and goals Charité 3R pursues, the progress achieved over the last twelve months, but also of what the greatest challenges are in the future. The symposium also served as the “onboarding” of the new Scientific Advisory Board, which gathered for its first meeting the following Wednesday, December 18, 2019.

Charité dean, Professor Axel Radlach Pries, in his opening statement recalled the founding history of Charité 3R and the political discussion three years ago on what role animal research should play in the future in the “city of science” of Berlin. “It was a time when I could say without further ado that animal testing couldn’t be done without for the time being,” Pries said. “But what I couldn’t say was that we were doing all we could do to find alternatives.”

Alternatives to animal testing need to be imagined first
Charité 3R from now on enjoys top-ranking support by its internationally staffed Scientific Advisory Board as well as the six members of the Berlin Advisory Board. Charité 3R spokesman Professor Stefan Hippenstiel gave a cordial welcome to the new members and also thanked the other guests – among them the members of the Representatives’ Council and the many Charité employees, who actively engage in the endeavor or who are sincerely interested in it. “It is you who make 3R at the Charité possible,” he said. “It is outstanding and it merits our special praise and thanks.”

“3 R” is short for “replace – reduce – refine”, which means to reduce animal testing by alternative methods or to completely replace them or to improve through refinement the living conditions of test animals. Refinement is where it’s most wanted, Stefan Hippenstiel reported, and named eleven projects which Charité 3R already funds on this subject, for instance the improvement of pain management for test animals. “You cannot stress the aspect of animal welfare enough,” says the researcher of lung infections about the fact that animal testing is still characteristic of biomedical research.

A cultural change also promises better biomedical research
To further pursue a cultural change or a change of mindset in the scientific community, Charité 3R employs the three pillars of communication, advanced education and research funding. Nearly a million euros are invested per year directly in novel 3R technologies – starting from January 2020. These are computer-aided models or genetic and stem cell technologies that will support the development of animal-free models such as organoids. “These technology platforms will be at everyone’s disposal Charité-wide,” says Hippenstiel, “and they are equally important for the training of our junior scientists. ”This investment will not only prove beneficial for animal welfare, he points out, but it will also improve results in basic research and thus enhance translation into therapies. Hippenstiel is convinced that “we can improve our knowledge, our diagnostics and our therapies of medical conditions, if we strictly apply 3R principles.”

Professor Arti Ahluwalia, member of the Scientific Advisory Board, confirms this. The scientist from Pisa University and head of the National Centre for 3R in Italy does research on brain organoids herself and has computed under which conditions the miniature brains function best. Given the right conditions, says Ahluwalia, organoids are a better model of human physiology in some respects than mice or rats are, “because they are made from the same material as we are.”

Are people free to use animals for their purposes?
According to Professor Peter Kunzmann, philosopher at the Institute for Animal Hygiene, Animal Welfare and Livestock Ethology at Hannover university, and also a member of the Scientific Advisory Board, such innovative technologies need to be increasingly used for one additional reason. Today, Kunzmann says, there is a societal consensus that people may use animals for their purposes – be it as pets, as food source or for research. “This ethical stance is man-made, however, and may someday be challenged.”

Charité dean Pries shared the ethical concerns and emphasized people’s moral obligation towards other living beings on the planet. “We have the obligation to forcefully pursue the development of alternatives to animal testing,” he said. “And this is why we push for a paradigm shift, not only in the Charité, but in Germany and Europe as well.”