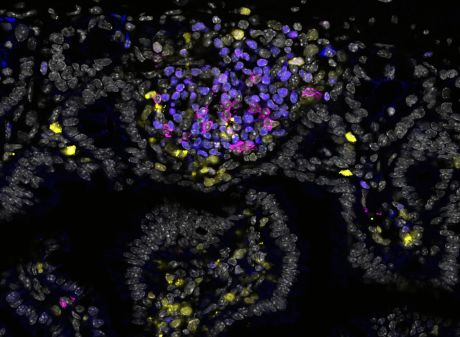 How do microbial signals from the gut influence the immune system?

The human gut is far more than just a digestive organ. Trillions of microbes live in it and maintain our health. Above all, the function of the immune system is decisively controlled by the so-called microbiome. Scientists led by microbiologist and immunologist Prof. Andreas Diefenbach are investigating this vital ecosystem using a variety of methods. In line with the 3R Principles, the researchers use - depending on the research question - organoids, cell cultures or conduct studies in mice, if no alternatives are available. In this context, research on so-called „wildling“ mice is playing an increasingly relevant role. In contrast to laboratory mice, which have a limited diversity microbiome, „wildling“ mice have a natural microbiome, which seems to be particularly relevant for questions on the interaction between the intestine and the immune system.

Bacteria, fungi and viruses have a bad reputation. Wrongly so. Because there are also the "good guys" that do not make us sick, but are even essential for life. In the human intestine, trillions of such microbes dwell in dense biofilms and together form the microbiome. In addition to the intestinal flora, our skin and other barrier organs are also microbially colonised. But what for?

"As we speak, our microbiome is communicating non-stop with our body cells," says Prof. Dr. Andreas Diefenbach, Director of the Institute for Microbiology, Infectious Diseases and Immunology at Charité. "The exciting thing is, that this communication is important to keep us alive."

To be able to receive the microbial signals from the gut, body cells such as epithelial and immune cells are equipped with receptors that can recognise components of both the microbiome and of diets, such as vitamin A or certain phytochemicals from green vegetables. Experiments with genetically modified mice in which these sensors had been switched off showed that the continuous interaction of microbiome and host is essential for the maintenance of the epithelial barrier: The protective epithelial barrier collapsed and a strong systemic inflammation occurred. The microbial signals from the gut thus seem to be indispensable for the integrity of the body's barriers.

Immune system needs the microbiome
The researchers led by Professor Diefenbach came to similar results when they brought mice that had grown up germ-free into contact with a virus. The animals, which had practically no intestinal flora, became severely ill. Mice that had grown up normally, on the other hand, easily coped with the virus. "We now know that the microbiome is needed for the immune system to function," Diefenbach explains the groundbreaking finding. This raises the question of the role of the microbiome in inflammatory diseases. Researchers now assume that the sharp increase in autoimmune diseases such as rheumatoid arthritis, chronic inflammatory bowel diseases, asthma or lupus erythematosus in industrialised and post-industrial societies has something to do with the microbiome. It is true that there is a genetic disposition for these diseases, in which the immune system is directed against the body's own structures or triggers an inflammatory reaction without any real cause. But according to studies, those affected do not fall ill as often as one would expect.

On the trail of autoimmune diseases
"The environmental component must be the leading trigger here," says Andreas Diefenbach, referring to the changes in dietary habits over the last 100 years, to which the human organism has presumably not yet adapted. Cardiovascular diseases such as arteriosclerosis, which is ultimately an inflammation of the vascular walls, could also be due to an altered microbiome or maladaptation to changed nutritional patterns, the researcher suspects. Why the intestinal microbiome has such a strong influence on the immune system has not yet been fully explained. Cytokine signals could play a decisive role, the Charité researchers and two other working groups found out last year, mainly type I interferons. Every healthy person has a certain level of these cytokines in their body, and their production is regulated by the microbiome. This brings the role of the microbiome in autoimmune diseases into focus, as elevated interferon signatures are found in patients years before the onset of disease. "At the moment, we suspect that these are tonic signals that are regulated by the microbiome and lead to a readiness in the body to respond to infections," says Diefenbach. Whether patients with autoimmune diseases have special components in the microbiome that increase interferon production is something he now wants to investigate.

The question of healthy nutrition
As a researcher who mainly deals with environmental influences on the microbiome and immune system - also and especially under the aspect: What keeps us healthy? - Andreas Diefenbach is often asked about the "best diet". As expected, he then answers that a Mediterranean diet with lots of fruit and vegetables is probably healthier than Coke and burgers. But why exactly, he says, is still not known. Almost as often he is asked whether broccoli or the broccoli pill can prevent cancer. "Maybe so, because bioactive components in broccoli, so-called glucosinolates, can prevent the development of colon carcinomas in mouse models," says the microbiologist and immunologist. However, very high concentrations could probably also be toxic - similar to the heart drug digitalis. "We are still far from recommending this to everyone. However, there is an untapped treasure in the use of natural substances to prevent diseases, and we urgently need more research on this."

What is undisputed, however, is that diet alters the microbiome and malnutrition, along with alcohol and antibiotics, can lead to an imbalance in the gut flora. Worldwide, research is being conducted on bacterial strains and metabolites that could have an effect on inflammatory diseases or on cancer immunotherapy. Diefenbach's institute is also looking for target structures in the intestine that could be therapeutically relevant for various diseases.

Wild microbiome better reflects the human being
Where possible, his laboratory is increasingly using intestinal organoids. The mini-organs derived from stem cells are well suited, for example, to test initial hypotheses without the use of animal experiments. But especially when it comes to the interaction between the microbiome and the immune system, laboratory animals are still irreplaceable. Immune cells circulate in the blood and migrate due to chemokine gradients - no alternative model is currently able to mimic such a complex system.

His team therefore focuses on refinement, pays attention to good husbandry conditions and designs animal experiments in such a way that as few animals as possible are needed and the results are reproducible. On top of that, the microbiologists have come to realise that animal experiments with mice with a more colourfully populated microbiome from wild mice (the so-called wildling microbiome) are a better representation of humans than the usual "clean" laboratory mice. This means that the results can apparently be transferred much better to humans, which would save many superfluous animal experiments, but could also improve research results. Corresponding wildling lines have already been bred at the Charité for a while and, according to Diefenbach's idea, should be used again in the future. "We are talking about this with Charité 3R, and this is something the whole research world should think about."