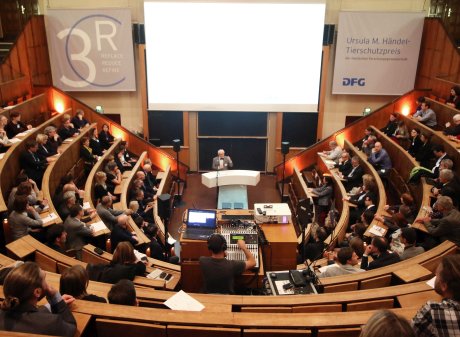 “Current limitations do not determine our future”

The 3R principles of ‘Replacement, Reduction and Refinement’ do not merely exist on paper. They have been internalized and are beginning to bear fruit. This was evidenced by the formal opening of the Charité 3R center on 23 November 2018 and the impressive contributions which were awarded the DFG’s (German Research Foundation) Ursula M. Händel Animal Welfare Prize. The day’s overall message that ‘Improving animal welfare in research is possible – together we can effect change’ was welcomed by the approximately 150 guests in attendance.

Alternatives to speed up translation
All of the speakers were in agreement that animal research is an unavoidable reality and will remain so for the foreseeable future. “However, it is precisely for this reason that we have a duty to be determined in our search for alternatives,” said the Dean of Charité, Prof. Axel Radlach Pries. Not only do such alternatives enable us to gradually replace the use of animals in research (Replacement) and minimize the number of animals used in testing (Reduction), their development is also aimed at improving the quality of the research produced and making it more generalizable. Options include computer modeling, stem cells, organoids, neurospheres and new imaging technologies.

“The alternatives are high tech and will help us to deliver research findings from the laboratory to the patient,” explained Charité 3R Spokesperson Prof. Dr. Stefan Hippenstiel. There is also confidence that what remains impossible today will be possible tomorrow. “Current limitations do not determine our future,” explained Prof. Hippenstiel.

Improvements in research go hand in hand with animal welfare
The fact that many of our current limitations are man-made is something Prof. Dr. Karl-Max Einhäupl alluded to in his welcome address. According to Charité’s Chief Executive Officer, only 20 percent of all animal research is reproducible due to poor design or sloppy conduct. In other words, 80 percent of all animal research is a complete waste. “It is imperative that we change this and that we improve the quality of research,” said Prof. Einhäupl. This is precisely why the close collaboration between Charité 3R and the QUEST-Center at the Berlin Institute of Health (BIH), which pursues this aim, represents such an important step. Charité 3R will of course work closely with many other partners, such as Technische Universität Berlin, Freie Universität Berlin, the Max Planck Institutes, the Max Delbrück Center for Molecular Medicine (MDC) and the Robert Koch Institute. “Together we will set new standards,” emphasized Prof. Einhäupl.

Less suffering and distress for animals
In addition to following the principles of ‘replacement’ and ‘reduction’, Charité 3R has a third objective: to improve animal welfare through the refinement of research practices and procedures. This could range from improving anesthesia to adopting experimental designs that reduce levels of stress in animals. Charité 3R has already provided funding totaling €300,000 to seven projects which aim to improve the living conditions of animals used in research. Ultimately, these changes are expected to also improve results. “The better the experimental conditions we provide, the faster we will get valid results,” said Prof. Dr. Stefan Treue, Director of the German Primate Center (DPZ) in Göttingen.

Berlin can become a pioneer for animal welfare
It appears undeniable that improving research quality means improving animal welfare, and vice versa. This is also the path pursued by the Berlin state government which, in both its coalition agreement and its higher education contracts, identified Berlin as the main hub for the development of alternatives to animal research. “We want to improve animal welfare and we want to eliminate - as rapidly and as far as possible – the need for animal experiments in medical research,” emphasized Steffen Krach, Berlin State Secretary for Science and Research. As one of the largest economic areas in Europe, Berlin has the potential to become a pioneer in the field of animal welfare. “The establishment of Charité 3R represents a major milestone on this path,” explained Steffen Krach.

Prof. Dr. Ellen Fritsche of the Leibniz Research Institute for Environmental Medicine at the Heinrich Heine University Düsseldorf studies specific chemicals and the risks they pose to normal brain development. Naturally, these substances could be tested on animals. However, given the sheer number of potentially toxic chemicals in existence, this would take decades. Furthermore, results obtained are not always fully transferable to humans. For this reason, Dr. Fritsche chose to go down a different path. Her research group use human stem cells to manufacture ‘neurospheres’, cell culture systems that mimic human organs and which, according to the toxicology specialist, provide an easier, more effective and more reliable means of testing substances for neurotoxicity. She now wants to use the prize money to further develop this testing system into an authorized alternative capable of replacing currently mandatory animal testing requirements.

A peek inside the brains of rats

PD Dr. Dr. Hamid Reza Noori, of the Max Planck Institute for Biological Cybernetics in Tübingen, succeeded in elucidating the biochemical signaling pathways which are fundamental to the processing of information inside the brains of rats. He did this without ever performing a single animal experiment. Instead, he collated the data from all previously published neurobiology studies involving rats and analyzed them using new methods from the fields of mathematics, data mining and machine learning. The qualified mathematician, physicist and physician has now made his data on more than 150,000 rats available to other researchers from across the globe via two open access databases. Work such as this shows that questions from the fields of neuroanatomy and neuropharmacology can often be addressed without reinventing the wheel. Dr. Noori’s work represents an impressive example of how big data can help reduce the need for animal research.

No results? Please also use our central search.